skip to main | skip to sidebar

Whatever happened to Baby Vivienne Jane?

Christian has been telling me for months that Viv is a toddler now and not a baby, but I've been resisting the title change as her baby months went by too quickly, and I wanted to extend them. He's right, however, even though I'm still not able to say those words aloud.

Today, while standing dripping in the bathtub after all the water had been drained out, she adamantly refused to put her final toy back in the net hanging from the side of the tub after she had put away all of its mates. If I tried to hand her the toy, a little green car, she would hit it and back away. If I tried to put it in front of her, she'd turn around. She would rather have frozen to death (in the 80 degree bathroom) than put that toy away. It was our first true battle of wills. I mean, we've crossed spoons over certain foods, but she'd always eventually eat enough to satisfy us both. However, I have never asked her to do something that she then utterly refused to do, and she's never thrown a tantrum to prove to me how steadfastly she holds her opinion of my request. She's usually so good about bringing me whatever object she's illicitly purloined, like as tissues from the trash or the remote. I merely have to ask her for the object and then look at anything other than her and she'll bring it right over. In the tub, though, she discovered that she has a say in what she does. Or she THINKS she has a say. I finally resorted, after 10 eternal minutes, to putting the toy in her hand, holding her hand shut and putting her hand and the toy in the net. I even dried her off and put on her lotion and diaper, all while she was standing irritably on the rubber mat on the bottom of the tub, with suds swirling around her toes.

We knew the tantrums would be coming, though, as she's started doing a little ritual of annoyance, usually when she's in a car seat, shopping cart or high chair, that will escalate to a tiny eruption. First, she'll whine loudly. Then, she'll ask for a cracker,which we'll refuse to provide. She'll then clench her fists, stiffen her body, stick out her legs, grimace and howl through clenched gums. It's actually a pretty funny little display, but laughter annoys her even further. We're trying to respond to these moments with calm and rational conversations about using words and being patient, but I think we're forgetting that, despite her ability to speak in complete sentences, she might not actually understand the request to breathe deeply.

I miss my baby already.
Posted by snusnu at 11:52 AM No comments:

I started cleaning out Mom's closet today, just the one in the bedroom, as the clothes are getting dusty and seeing them hang there makes it impossible to not burst into tears every time I go into the master bedroom to answer the phone. I noticed something interesting. Well, interesting to me, anyway. Mom had conservative and practical fashion tastes, which I knew already, but what I didn't know what that she had started to purchase attractive, stylistically appropriate designer clothing. She had always shopped at Penny's and The Bon (nee Macy's), but everything she purchased was on the 70% off sale rack and usually the house brand or something similar (read slightly sad). However, I found a Kors jacket, a brand new pair of DKNY jeans and a whole panoply of highly colored button up shirts in jaunty hues from Ralph Lauren. Mom was making an effort. I guess the years I spent mocking her love of pleats finally wore her down, as I did find her two virtually identical pairs of boot cut jeans that I know she wore every day, because once, after she had returned home from a visit, she called to ask me if she had left the first pair at my house, as she couldn't find them and they were her "good" jeans. Hence the second pair.

Maybe in a few years' time, she would have flown to Vegas twice a year to shop exclusively at Versace. Well, if she could part stand to live without her 17 silk shells in an array of fetching beiges, purchased in bulk from the Macy's outlet.
Posted by snusnu at 9:34 PM No comments:

The Battle vs. The War

I should count my blessings and not complain, but that would defeat the purpose of having a blog. Viv really hates to nap. I've said it before, but I thought things were going better. It's not that she's napping any longer than she did before, but putting her in her own room made a huge difference in merely getting her to go to sleep. Her naps are still brief, 20-45 minutes at most, and maybe twice a day, but at least they were reliable. I could shower during the first nap and put in laundry or check email without having her press the power button on the laptop or slam it shut on my fingers. She really dislikes the laptop. Anyway, she napped a little. Now, she doesn't seem to want to nap at all. For the past week, I've been fighting with her at least twice a day in an attempt to get her to nap even a little. She will lie down with her binky and behave just as before the battle began. Five minutes later, when I'm downstairs cleaning or making calls or checking email, I'll hear the first howl. I'll let it go for the next ten minutes and then she'll escalate. So, I'll go upstairs, put her binky back in, lay her back down and leave. She'll be silent and then the wailing will turn into shrieking and then hysterical tears. So, after a half hour of all of this, I'll get her up, feed her and play with her for another two hours or so until she is fairly dropping to the floor with exhaustion. I'll put her down again, and, if I'm lucky, she'll sleep. However, I haven't been very lucky lately.

I know she's probably adjusting her own schedule to do away with one or both naps, but I don't deal with change as well as she apparently does. I don't want to war with my child over sleep, but I need a few minutes each day to myself. I think I'll get a treadmill with Elmo taped to the handlebars.
Posted by snusnu at 6:26 PM 3 comments:

As Viv stands wailing in her crib upstairs...

...as I unsuccessfully try to get her to nap, I'm remembering her last year at this time, chubby and serious, still sleeping in the bassinet next to the bed, and finally ours. And now she's so tall and independent that I swear she's going to ask to take driver's ed so she can drive herself to work. I mean, look at the difference one year makes:

The day of her final adoption court hearing: 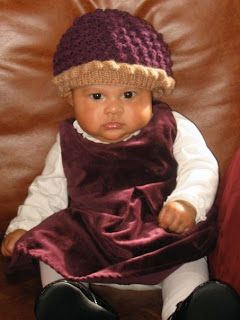 And now, at fifteen months: 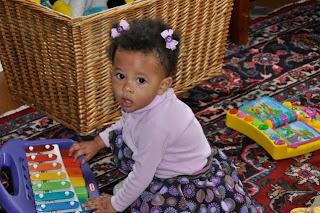 Does every passing year bring changes this dramatic? I hope so.
Posted by snusnu at 1:48 PM 3 comments:

snusnu
I'm an opera singer and SAHM. I live in Seattle with my husband Christian and daughter Viv, where we have a little red house which we share with two snakes, two box turtles, three parrots and all of my neuroses and allergies. God, we're going to be devoured by our pets.