skip to main | skip to sidebar

The Smell of Evil

So, I know what my kid eats. I know that she eats vegetables and oatmeal and fruit and a little cheese and, occasionally, small amounts of meat. There's nothing mysterious about her food, she's not consuming steak tartare or sashimi, so why does her poop smell like 1,000 festering corpses? Sweet zombie Jesus, I have never smelled a stench like her poop stench. And when her diaper disposal unit is full and has to be emptied? If I could ralph up everything I've ever eaten because of the pervading aroma issuing from that pit of evil, I would. No amount of washing, bleaching or deodorizing makes even a modicum of difference. Post-cleaning, the thing just smells like bleach or soap or lavender and the breath of the Sarlaac.

Would you think that someone so adorable could produce such a smell? 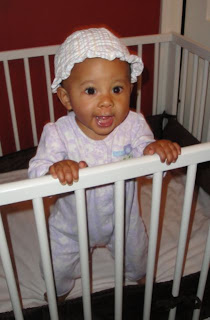 "Lessons learned from surgery" or "Wow, that really sucked."

Mom's memorial was this last weekend, and I had been dreading it since Dad mentioned that he wanted to have it. It was just so soon, so painful, so immediate. Tina likened the emotions rolling with it to the water held back by the little boy with his finger in the dam. I have my finger in the tragedy dam, and I can let out as much grief as I can handle, and then I can plug the dam back up. This service was the dam breaking for me, and, coupled with Dad's insistence that we understand why he wanted to have the service whether or not we wanted to understand, I was flooded. I had also been in charge of editing and timing the slideshow with appropriate music, so I had repeatedly watched Mom grow up, marry and have kids to the point where I couldn't bear it any more. So, I wasn't surprised when I started to feel unwell on Friday, before the drive to Spokane. By Saturday I was mildly nauseated, achy, sneezy and congested. The service itself was actually much better than anticipated and I came out of it feeling slightly improved. No one told me that Mom was in a better place, and the conversations revolved heavily around the babies in the family.

Sunday we drove home and were much delayed by a dust storm and consequent road closure on I-90, necessitating our taking the 2 most of the way. It was a seven and a half hour trip from beginning to end, and was exhausting. I still felt poorly on Monday and thought I had a sinus infection, but meds coupled with food from Shelly made me feel better, and rehearsal was surprisingly enjoyable, so, at the end of it, I felt well enough to go for a drink and some food.

I had one drink with lemonade and vodka and three little cheeseburger sliders, and started to feel abysmal about a half hour later. By the time I got home, I was intensely nauseated and desperately needed to vomit. I tried and tried and tried, but was utterly confounded, as the surgery I had in May to repair my hiatal hernia restructured the lower sphincter in my esophagus as to allow nothing but small amounts of gas to reverse course. Because nothing was moving in either direction, the nausea wouldn't pass and my abdomen became distended with the air I was gasping in. I continued to retch horribly for an hour before allowing Christian to take me to the ER. Thank God they were quick and got me in as soon as I made it out of their bathroom. They immediately gave me Zofran and dilaudid and within moments I stopped trying to barf out my intestines, which I would have welcomed, actually.

We stayed at the hospital for nearly five hours as I was hydrated and medicated and my lab results were returned. Chris was home with the baby, who woke at an uncharacteristically early hour and refused to sleep again until Chris met her unreasonable demands. We relieved him at 5:30 am and slept until she woke again at 9, when Shelly came over to watch her while we slept some more.

While I'm grateful that the surgery has prevented most of the reflux that has dogged my the entirety of my life, I'm not sure that I would recommend the procedure to someone in my situation. Maybe last night is too recent, but Jesus Christ, that was truly horrific. At least I know it worked.
Posted by snusnu at 5:07 PM No comments:

snusnu
I'm an opera singer and SAHM. I live in Seattle with my husband Christian and daughter Viv, where we have a little red house which we share with two snakes, two box turtles, three parrots and all of my neuroses and allergies. God, we're going to be devoured by our pets.